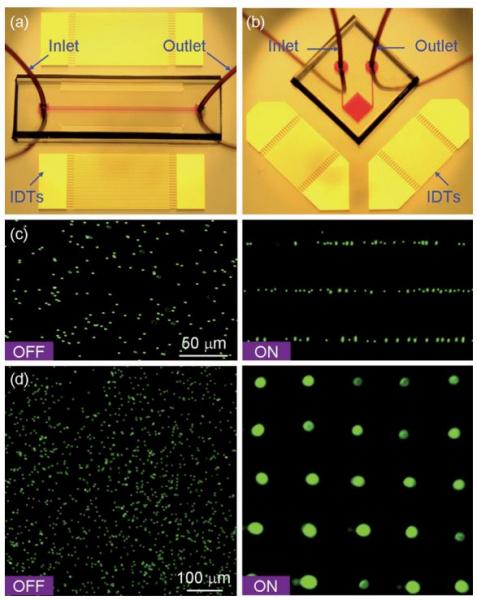 Here we present an active patterning technique named ‘‘acoustic tweezers’’ that utilizes standing surface acoustic wave (SSAW) to manipulate and pattern cells and microparticles. This technique is capable of patterning cells and microparticles regardless of shape, size, charge or polarity. Its power intensity, approximately 5 x 105 times lower than that of optical tweezers, compares favorably with those of other active patterning methods. Flow cytometry studies have revealed it to be non-invasive. The aforementioned advantages, along with this technique’s simple design and ability to be miniaturized, render the ‘‘acoustic tweezers’’ technique a promising tool for various applications in biology, chemistry, engineering, and materials science. 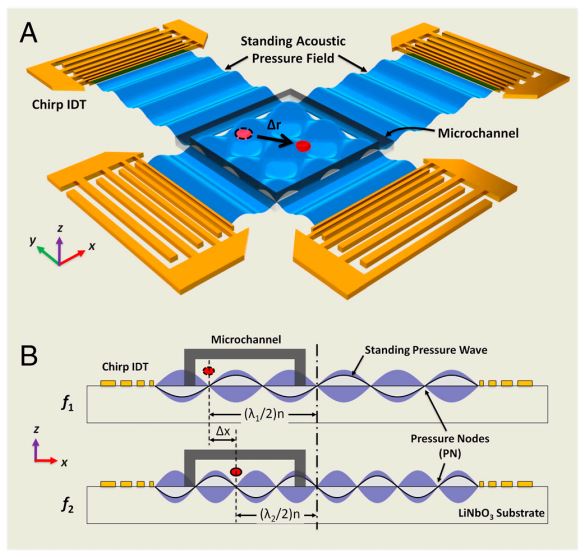 Figure: Device structure and working mechanism of the acoustic tweezers. (A) Schematic illustrating a microfluidic device with orthogonal pairs of chirped IDTs for generating standing SAW. (B) A standing SAW field generated by driving chirped IDTs at frequency f 1 and f2. When particles are trapped at the nth pressure node, they can be translated a distance of (Δλ∕2) n by switching from f1 to f2. This relationship indicates that the particle displacement can be tuned by varying the pressure node where the particle is trapped.

Techniques that can dexterously manipulate single particles, cells, and organisms are invaluable for many applications in biology, chemistry, engineering, and physics. Here, we demonstrate standing surface acoustic wave based “acoustic tweezers” that can trap and manipulate single microparticles, cells, and entire organisms (i.e., Caenorhabditis elegans) in a single-layer microfluidic chip. Our acoustic tweezers utilize the wide resonance band of chirped interdigital transducers to achieve real-time control of a standing surface acoustic wave field, which enables flexible manipulation of most known microparticles. The power density required by our acoustic device is significantly lower than its optical counterparts (10,000,000 times less than optical tweezers and 100 times less than optoelectronic tweezers), which renders the technique more biocompatible and amenable to miniaturization. Cell-viability tests were conducted to verify the tweezers’ compatibility with biological objects. With its advantages in biocompatibility, miniaturization, and versatility, the acoustic tweezers presented here will become a powerful tool for many disciplines of science and engineering. 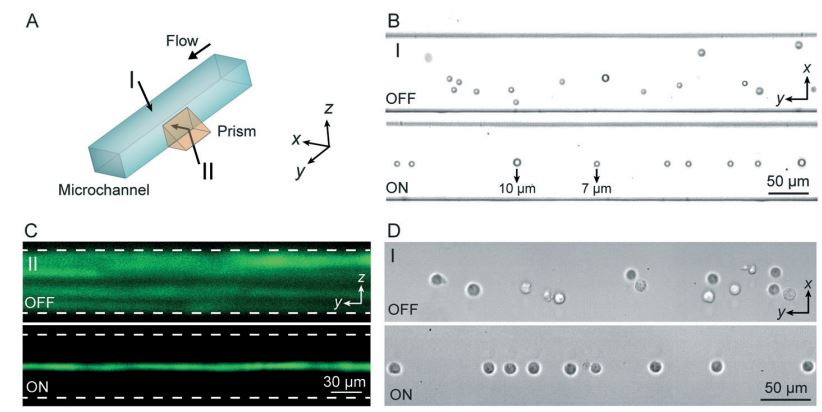 Figure: (A) SSAW-based 3D particle focusing observed from different perspectives (I: top view, II: side view). (B) Top-view bright field images and (C) side-view fluorescent stacking images of the particle flow pattern without (OFF) and with (ON) SSAW focusing. The dashed lines in (C) indicate the channel boundaries. (D) Top-view images showing cell focusing by SSAW.

The development of microfluidic chip-based cytometers has become an important area due to their advantages of compact size and low cost. Herein, we demonstrate a sheathless microfluidic cytometer which integrates a standing surface acoustic wave (SSAW)-based microdevice capable of 3D particle/cell focusing with a laser-induced fluorescence (LIF) detection system. Using SSAW, our microfluidic cytometer was able to continuously focus microparticles/cells at the pressure node inside a microchannel. Flow cytometry was successfully demonstrated using this system with a coefficient of variation (CV) of less than 10% at a throughput of ~1000 events s−1 when calibration beads were used. We also demonstrated that fluorescently labeled human promyelocytic leukemia cells (HL-60) could be effectively focused and detected with our SSAW-based system. This SSAW-based microfluidic cytometer did not require any sheath flows or complex structures, and it allowed for simple operation over a wide range of sample flow rates. Moreover, with the gentle, bio-compatible nature of low-power surface acoustic waves, this technique is expected to be able to preserve the integrity of cells and other bioparticles. 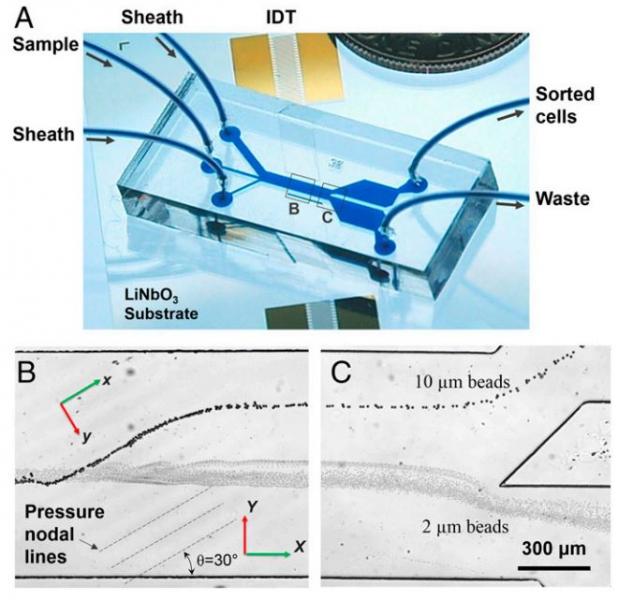 Figure: Schematic illustration of working principle and device structure. (A) Photo showing a taSSAW-based cell-separation device. (B) and (C) Separation process for 10- and 2-μm-diameter polystyrene beads in the taSSAW working region and the outlet region, respectively.

We have developed a unique approach for the separation of particles and biological cells through standing surface acoustic waves oriented at an optimum angle to the fluid flow direction in a microfluidic device. This experimental setup, optimized by systematic analyses, has been used to demonstrate effective separation based on size, compressibility, and mechanical properties of particles and cells. The potential of this method for biological–biomedical applications was demonstrated through the example of isolating MCF-7 breast cancer cells from white blood cells. The method offers a possible route for label-free particle or cell separation for many applications in research, disease diagnosis, and drug-efficacy assessment.

A5: A high-throughput acoustic cell sorter 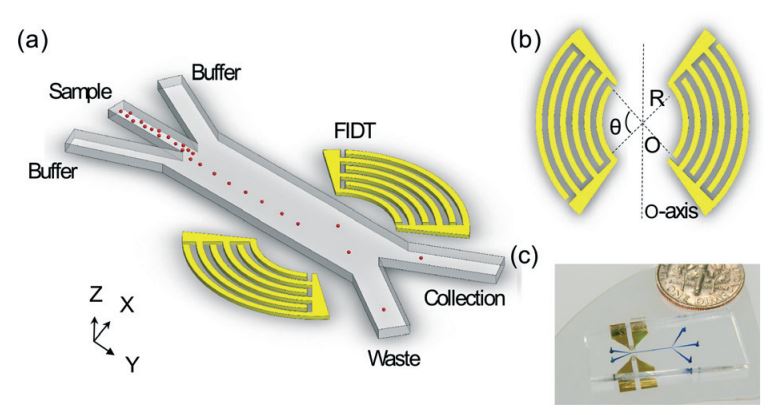 Figure: (A) Schematic of the SSAW-based sorter excited by FIDTs. (B) The concentric geometry of the FIDTs. θ is the degree of arcs and R is the radius of innermost transducer. O is the focal point and the two sets of FIDTs is O-axis symmetric. (C) An optical image of our high throughput SSAW sorter.

Acoustic-based fluorescence activated cell sorters (FACS) have drawn increased attention in recent years due to their versatility, high biocompatibility, high controllability, and simple design. However, the sorting throughput for existing acoustic cell sorters is far from optimum for practical applications. Here we report a high-throughput cell sorting method based on standing surface acoustic waves (SSAWs). We utilized a pair of focused interdigital transducers (FIDTs) to generate SSAW with high resolution and high energy efficiency. As a result, the sorting throughput is improved significantly from conventional acoustic-based cell sorting methods. We demonstrated the successful sorting of 10 μm polystyrene particles with a minimum actuation time of 72 μs, which translates to a potential sorting rate of more than 13,800 events per second. Without using a cell-detection unit, we were able to demonstrate an actual sorting throughput of 3,300 events per second. Our sorting method can be conveniently integrated with upstream detection units, and it represents an important development towards a functional acoustic-based FACS system. 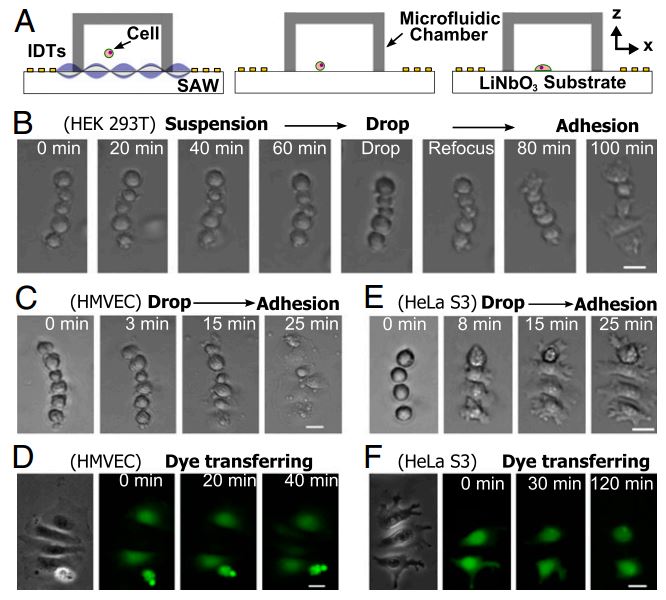 Figure: Translation of suspended assemblies to the adherent state. (A) Schematic of experimental setup and procedure. Linear assemblies of cells were formed under the control of a tunable acoustic well. After the removal of the acoustic field, cells were allowed to drop to the surface and attach. (B) The process of in-suspension assembly and attachment. HEK 293T cells were first assembled in suspension. The acoustic field was maintained for 1 h in order that cells could be kept in suspension regardless of the properties of the surface. Once the acoustic field is removed, cells quickly attach to the collagen-coated surface and start to spread while maintaining the same assembly as in suspension. In-suspension assembly and attachment of (C) HMVEC and (E) HeLa S3 cells, respectively. Dye transfer between attached (D) HMVEC and (F) HeLa S3 cells, respectively, with defined geometry. Scale bar: 20 μm.

We present a unique acoustic well approach that can precisely control cell-to-cell distance and cell–cell interactions. Our technology can achieve high precision and high throughput simultaneously while preserving the integrity of cells. It is capable of creating cell assemblies with precise spatial control both in suspension and on a substrate. We envision the exploitation of this powerful technology, for example, in the study of cell–cell interactions in fields, such as immunology, developmental biology, neuroscience, and cancer metastasis, and in the studies of cell–cell and cell–matrix adhesion. 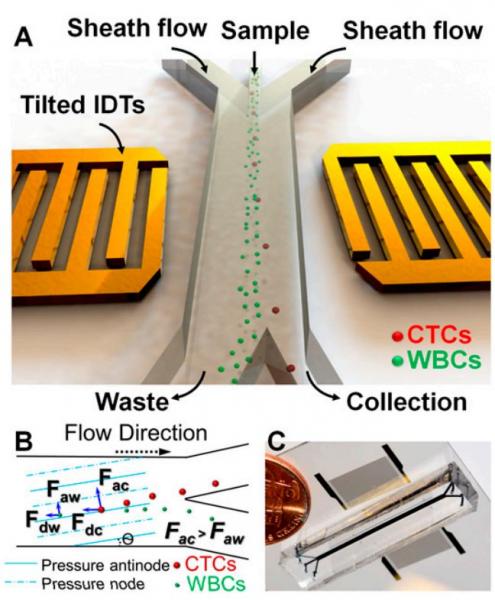 Figure: Schematic illustration and image of the high-throughput taSSAW device for cancer cell separation. (A) Illustration of taSSAW-based cell separation. (B) Schematic of the working mechanism behind taSSAW-based cell separation. The direction of the pressure nodes and pressure antinodes were established at an angle of inclination (θ) to the fluid flow direction inside a microfluidic channel. Larger CTCs experience a larger acoustic radiation force (Fac) than WBCs (Faw). As a result, CTCs have a larger vertical displacement (normal to the flow direction) than WBCs. Fdc and Fdw are the drag force experienced by CTCs and WBCs, respectively. (C) An actual image of the taSSAW cell separation device. Blue ink was used to help visualize the microfluidic channel.

The separation and analysis of circulating tumor cells (CTCs) provides physicians a minimally invasive way to monitor the response of cancer patients to various treatments. Among the existing cellseparation methods, acoustic-based approaches provide significant potential to preserve the phenotypic and genotypic characteristics of sorted cells, owing to their safe, label-free, and contactless nature. In this work, we report the development of an acoustic-based device that successfully demonstrates the isolation of rare CTCs from the clinical blood samples of cancer patients. Our work thus provides a unique means to obtain viable and undamaged CTCs, which can subsequently be cultured. The results presented here offer unique pathways for better cancer diagnosis, prognosis, therapy monitoring, and metastasis research.

Figure: Illustration of our 3D acoustic tweezers. (A) Configuration of the planar surface acoustic wave generators, used to generate volumetric nodes, surrounding the microfluidic experimental area. The Inset indicates a single particle within a “3D trapping node,” which is independently manipulated along the x, y, or z axes. (B) Numerical simulation results mapping the acoustic field around a particle that shows the physical operating principle for the 3D acoustic tweezers. The 3D trapping node in the microfluidic chamber is created by two superimposed, orthogonal, standing surface acoustic waves and the induced acoustic streaming.

We present 3D acoustic tweezers, which can trap and manipulate single cells and particles along three mutually orthogonal axes of motion by recourse to surface acoustic waves. We use 3D acoustic tweezers to pick up single cells, or entire cell assemblies, and deliver them to desired locations to create 2D and 3D cell patterns, or print the cells into complex shapes. This technology is thus shown to offer better performance over prior cell manipulation techniques in terms of both accurate and precise motion in a noninvasive, label-free, and contactless manner. This method offers the potential to accurately print 3D multicellular architectures for applications in biomanufacturing, tissue engineering, regenerative medicine, neuroscience, and cancer metastasis research.